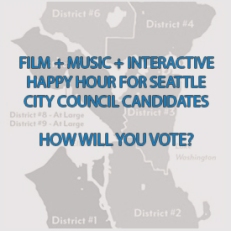 Hello Seattle Creative Community! It’s election time, and with the new district-based Seattle City Council race reaching fever pitch, we want to be sure the film, music, and creative communities are informed and involved in the conversation!

Join us on Wednesday, October 28 for the Film + Music + Interactive Happy Hour – Election Edition! We’ve invited all Seattle City Council Candidates to meet, mingle, and talk with you about pressing issues in the the local film, music, and creative industries in a relaxed and informal environment.

We asked each candidate to answer the two industry focused questions below. We’ll post their responses here before the event. You can read each candidate’s position and come to the event ready to ask questions, learn, and engage in the local political process!

Film:
The City of Seattle has supported filmmaking for over 20 years with a film office and streamlined permitting, but the filmmaking landscape has changed and is now driven by regional tax incentives.  For the first time in many years, Seattle is no longer on Filmmaker Magazine’s Top Ten Cities list.  Portland has multiple television series filming while Seattle has none; Vancouver continues to be the filming location for television series and movies set in Seattle.  What do you propose the City can do to be more competitive with Vancouver, Portland, and other leading-edge filmmaking cities?

Music:
Seattle is growing at a rapid pace, making affordability – around housing, availability of practice space, and maintaining a range of music venue sizes in which to perform – a key issue for musicians to be able to live and work in Seattle. What will you do to support a vibrant local music scene and healthy music economy?

The October Film + Music + Interactive Happy Hour is planned and presented by:

*This is an open networking event. There will be no formal presentation.

This entry was posted on October 1, 2015 by filmmusicoffice.