The Mixer: February 2019 – The Paper Tigers Fight for Representation in Film

As more diverse films such as Crazy Rich Asians and Black Panther reshape the Hollywood landscape, independent films continue to evolve as a launching pad for new talents of color, as with Searching and Sorry To Bother You. This month at The Mixer, Director Bao Tran and producers Al’n Duong and Dan Gildark will speak about their upcoming Kung Fu action comedy film, The Paper Tigers. Hear about their journey in creating The Paper Tigers and how the local community can help bring the project to fruition.

Executive Director of the Northwest Film Forum (and former ranked semi-pro Counter-Strike player) Vivian Hua will also share her efforts in creating more inclusive spaces for film production and exhibition through institutional change, as well as finding new pathways to support filmmakers of color, such as The Paper Tigers.

Join us for this amazing panel discussion and to network with fellow creatives!

This event is free and open to the public. All ages are welcome.

Mentored early on by master action director Corey Yuen, Bao was instilled with an approach to action that doesn’t rely solely on spectacle, but also draws on story and character. Screen Anarchy praised his written-and-directed short Bookie for its “flawlessly realized world populated by entirely fleshed out and believable characters, driven by a compelling narrative and brought to sumptuous life.” He has since traveled back to his homeland of Vietnam to work as a feature film editor. His editing credits include Cho Lon, one of Southeast Asia’s highest-budgeted action blockbusters, and Jackpot, a heartfelt comedy selected as Vietnam’s official entry to the 2016 Oscars for Best Foreign Film. Ain’t It Cool News enthusiastically declared Bao as “a director I expect to see big things from.”

Al’n harbored great passion for martial arts films and NBA basketball from a young age. After reaching the staggering height of 5 foot 7 inches, Al’n put all his energy into making backyard Kung Fu films in high school using home video cameras. He continued his education in Seattle at the University of Washington, focusing on post-modern cinema and martial arts films. Al’n began his film career directing and producing Number 5ive, the Grand Jury Prize Winner at the 2005 Wazzu International Film Festival. Having started out in camera department before transitioning to producing, Al’n brings a holistic knowledge in creative problem-solving and film set management – ensuring a productive, positive, and safe environment. Al’n is also a video producer in the video game industry and director/producer of the pilot travel show, Casting About with Thao Tran.

Thrust into drama at twelve by a copy of Unabridged Grimm’s Fairy Tales, Dan’s life has been motivated by storytelling. Moving to Seattle in the 90’s to focus on writing he fell into the world of fringe theatre. The Balkan conflict called next and Dan went to investigate and document the war. In 2007 he directed and produced his first feature Cthulhu, winning ‘best of festival’ at both the Eerie and H.P. Lovecraft Film Festivals earning Dan a nomination for The Stranger’s Genius Award. The film was purchased and distributed by Regent Releasing. 2014 marked Dan’s return to theatre, directing and starring in the play Whackjob. Dan continues to utilize his deep experience to tell the stories that make us human. 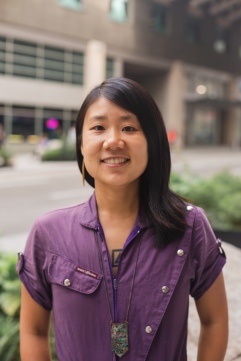 Vivian Hua is a writer, filmmaker, and organizer who worked with NWFF in various capacities before stepping into her role as Executive Director in October 2018. She first came to the organization as the Co-Founder of the national film and civil rights discussion series, The Seventh Art Stand, and then as the organization’s Design Lead, where she led rebranding efforts. She has been the Editor-in-Chief of the socially conscious arts publication, REDEFINE, since 2004, and much of her work unifies her interest in the metaphysical with her belief that art can positively transform the self and society. Her narrative short film, Searching Skies–which touches on the controversial topic of Syrian refugee resettlement in the United States–was released in 2017, after making festival rounds. She is currently writing her next film projects, as well as researching national efforts to preserve cultural space.

NWFF is a non-profit film and arts center, located in Seattle, that provides educational workshops and artist services for film and media makers at all stages of their development.

This entry was posted on February 20, 2019 by filmmusicoffice.