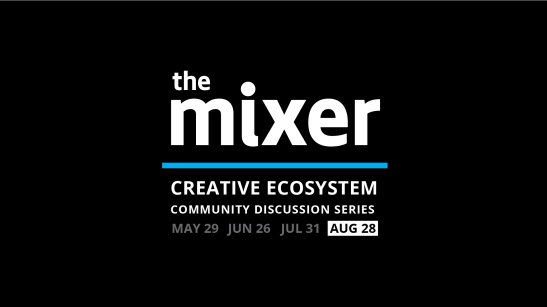 Join us at Northwest African American Museum on 8/28 for the fourth and final in a series of community discussions to help shape the City’s vision for the future of our creative economy. This month’s topic is Advancing Equity in the Arts – Real Talk!

Guest speakers Sara Porkalob, Dani Tirrell, and Reese Tanimura will discuss will discuss issues of access and representation, leadership, and organizational culture. After the speaker portion, attendees will break out into small groups for networking and to give feedback about how the city can grow, support, and retain creatives while minimizing disparities and inequity.

This event is free and open to the public. All ages are welcome. Enjoy complimentary refreshments by That Brown Girl Cooks!, and a cash bar for guests 21+ by Brown Liquor Cocktail Co.

All members of Seattle’s creative community are welcome at this conversation: visual artists, performers, music and film industry professionals, teaching artists, arts administrators – whatever role you play in our local creative scene, we want to hear from you!

Sara Porkalob is a Seattle based, award winning artist-activist and creator of the DRAGON CYCLE. She’s featured in Seattle Magazine’s Most Influential People of 2018, City Art’s 2017 Futures List, and served as Intiman Theatre’s 2017 Co-Curator. She is a co-founder of DeConstruct, an online journal of intersectional performance critique.

The DRAGON CYCLE is a trilogy of plays about three generations of Sara’s family; one play for each generation built around a central female protagonist (grandmother, mother, self). The first two plays in the cycle, Dragon Lady and Dragon Mama, won three 2018 Gregory Awards and two 2019 Elliot Norton Awards, respectively. The third in the cycle, Dragon Baby, is commissioned by American Repertory Theatre and will premiere on their stage in the near future.

Sara is also collaborating with the City of Seattle and their new Creative Strategies Initiative (CSI), using arts- and culture-based approaches to build racial equity in non-arts policy areas like the environment, housing, workforce and community development. In 4 years she plans to run for Seattle City Council, have a Netflix contract, and a couple of Tony Awards under her belt.  saraporkalob.com

Dani Tirrell is a Black, Queer choreographer, dancer and movement guide. Dani has guided people in Detroit and Seattle as well as sharing movement practices in other cities in the United States. Currently Dani is the curator for the 2019/2020 season of Central District Forum for Arts and Ideas, this is Dani’s second season as curator. Dani is the host and co-creator of Sunday Dinners, and served as the student advisor for the Arts Diversity Council at University of Washington (Seattle campus). Dani is the founder and current artistic director of The Congregation a movement/art collective that is led by mostly Black and Queer bodies. Dani is currently teaching at Northwest Tap Connection and University of Washington Seattle campus and Bothell campus (fall 2019). Dani has created work for Dance This (Northwest Tap Connection), Strictly Seattle (advance/professional track), Seattle Repertory Theater, Nina Simone Four Women (Directed by Valerie Curtis-Newton). Dani also was at the helm of four sold out shows, for Dani’s production of Black Bois (On the Boards). In 2019 Dani was the recipient of an Artist Trust Fellowship Award and a Dance Crush Award for Black Bois (performance). Dani also received a 2018 Arts Matter Fellowship grant. Dani current work FagGod in collaboration with Anastasia Renee and Naa Akua was presented in Central District Forum for Arts and Ideas 2019/2020 season.  danitirrell.com

Reese Tanimura is a fourth generation Japanese American who was born on the island of O’ahu and raised between Hawaii and Illinois. Her passion for music was ignited the moment she began playing the ukulele and has grown steadily through numerous instruments and genres. Reese chairs the Seattle Music Commission, and is Managing Director of Northwest Folklife, a sublime fusion of her personal endeavors with the organizational vision of ‘Strengthening communities through arts and culture.’ Previously the Program Director for Rain City Rock Camp, Reese continues to serve as a volunteer and evangelist of their mission to empower girls, women, and gender non-conforming individuals to engage their creative potential through music, champion equity, and thrive in a community of allies and activists.

Since 2008, Reese has been the Music Director of Rain City Jazz Orchestra, an 18-piece all female/non-binary Big Band ensemble. She is a founding member of the urban folkgrass group, Lavender Lucy, and plays guitar in the all-female Nirvana tribute band, Heart Shaped Boxes. Reese is deeply committed to making sure that our City of Music is a thriving and sustainable ecosystem for artists and industry alike, and that racial equity continues to be held as the standard for progress.

This conversation is more important now than ever: the 2019 Creative Economy Report found that Seattle creative workers employed in tech (web developers, for example) are the highest paid in the nation, while creative workers employed in arts and entertainment occupations (such as photographers and musicians) are the lowest paid in the nation. The report also found that women and people of color are underrepresented in certain creative occupations, and that wage disparities exist along job title, race, and gender. We need to hear from you, Seattle’s creative workers, to help us better understand the full story behind these disparities and find ways to bridge the gap.

This entry was posted on August 8, 2019 by filmmusicoffice.